Get fresh music recommendations delivered to your inbox every Friday.
We've updated our Terms of Use. You can review the changes here.

music for the man who grew common in wisdom 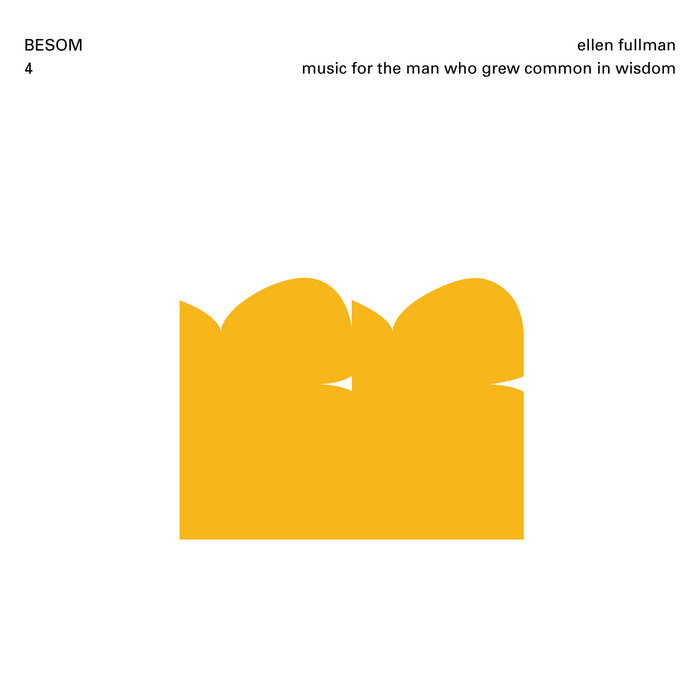 besom presse announces the release of Ellen Fullman’s Music for the Man Who Grew Common in Wisdom. Known prominently for her sculptural Long String Instrument (LSI), these musique concrete pieces showcase an underrecognized side of Fullman’s sound investigations. In two expansive works, Fullman voyages through the comic, the menacing and the blissful all while evoking the unique kinetic and timbral aesthetic for which she is widely praised. Composed between 1987-1989, while living in Austin, Texas, the music originally served as accompaniment to choreographer Deborah Hay's dance piece of the same name. The besom presse release presents the last two movements of the full composition.

In 1985, Hay, a founding member of the Judson Dance Theater, commissioned Fullman to collaborate on a new work. Hay was deeply influenced by her experience as a member of the Merce Cunningham Dance Company and to the way John Cage and Cunningham collaborated. As such, the only relationship planned between Fullman’s music and the choreography was timing. Inspired by Hay’s open-ended approach and encouraged to use a new set of musical implements, Fullman explained, “I found this way of working to be remarkably refreshing and respectful of my process. I felt free to delve into my attraction for absurdity, knowing that I would not be judged.” With a variety of acoustic sound sources, Music for the Man Who Grew Common in Wisdom finds Fullman exploring the possibilities of the Prophet sampler. Describing her experience of using this tool she explains: “I was fascinated by what could be done with the Prophet and worked in a way that could be seen as an outgrowth from the musique concrete approach that I had used with a reel-to-reel tape recorder in earlier years.”

One of the most interesting contextual aspects of Music for the Man Who Grew Common in Wisdom is the flux under which it was created. Recently relocated and using unfamiliar equipment after having dedicated so much of her time and energy to advancing her knowledge of the LSI, this record provides an ultra-rare snapshot of Fullman’s journey as a composer: a suspended moment wherein her earlier phase of sound collaging comes into direct contact with her sensibilities of movement and sound as refined by her work with the LSI.

The excursion rewards careful, repeated listening. Its musical events arrive spontaneously while striking a rare balance between the poetical and unaffected. While the work is time-stamped by its technology, it evades the quaintness that beleaguers so many novel releases from the past. On side A, titled Music for the Gardener, Fullman triggers an assortment of exquisitely recorded acoustic sounds from a variety of quotidian sources including bits of glass dropped on a concrete slab, the gentle clanking of suspended woodscraps, water swishing back and forth, and her own voice. The piece begins with the glass, arranged chromatically, which Fullman playfully improvises with by triggering individual notes from a series of chord shapes. The effervescent chime and bounce is punctuated with sudden cluster chords that explode like a six-pack against a brick wall. This gives way to the round and muted tones of the swinging timber—a generous sonic foil to the icy digital aliasing of the glass samples. Shifting focus again, we hear the hi-fi swishing of water in a tub reproduced in a dazzlingly wide stereo field made possible by microphones arranged at either end of the bath. Fullman’s sampled voice, played in a meditative modal melody, signifies a kind of coda anchored by the rhythmic pulsing of clanking wood.

Side B’s Music for the Aviator is rooted in Deborah’s directive: "We contain the mystery, but we don't know what it is." Like an alternative soundtrack to Jodorowsky’s Santa Sangre, starter guns, percolating bubbles, cheering crowds, and a calliope organ conjure a lysergic day at the circus. More or less abrupt disturbances take place throughout. The circus is consumed by cetaceous blowhole sounds, which in turn fade into something vaguely like the Hindewhu whistle of Ba-Benzélé Pygmy music (think the intro to Herbie Hancock’s Watermelon Man). Eventually the piece settles into a satisfying rhythmic pulse of tuned breath sounds set in a cloud of woozy voice loops while a tightly packed spectrum of overtones springs forth.

The Man Who Grew Common In Wisdom was performed in August 2019 at the Tanz im August Festival, Berlin, in their RE-Perspective Deborah Hay, Works from 1968 to the Present. Eva Mohn of the Cullberg Ballet, Stockholm, was the soloist, and the work has become part of their repertoire. Music from the first movement of this piece, The Navigator (aka “Staggered Stasis”), was made available earlier this year by Superior Viaduct on a reissue of Fullman's 1987 self-released cassette, In The Sea.

composed by ellen fullman between 1987-1989 to accompany choreographer deborah hay's solo triology: the man who grew common in wisdom.

"music for the gardener" uses the image of a curbside garden decorated with bits of broken glass and scrap wood. recordings of these materials are manipulated with a prophet sampler to build an audio mosaic out of discarded things. "music for the aviator" is rooted in deborah’s directive: "we contain the mystery, but we don't know what it is."

besom presse is a los angeles–based publisher concerned with *perceptually activated* and rigorous works on paper and sound media.

Bandcamp Daily  your guide to the world of Bandcamp